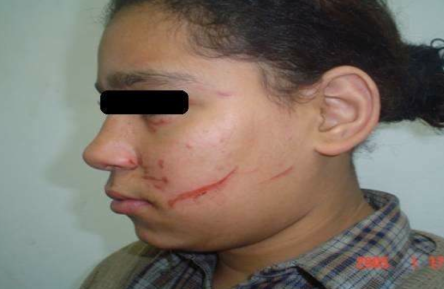 This is a picture of a girl who came to the shelter healing from a carving after rape.

I couldn’t go back to the shelter the next day Maya had left it, taking with her, her 9-month-old whom she had swung across the room, banging her on the wall and covering her tiny, disabled body with blood that had poured from her own flesh when she had cut her stomach in a moment of rage against all the circumstances that had led her to the street. The events of that day can be found here: http://wp.me/p1sf3y-64

I’d developed what seemed like a consistent lump in my throat, my voice was different and my eyes stopped seeing the world in the same way. I had said in the post, I was more of a coward than I had thought; it was true, I didn’t want to go back and hear what more Maya had done. I was scared to find out that Laila had been attacked despite their best efforts. I worried about what other stories may have been waiting. But I couldn’t stay away and I went the day after the next. I felt a chill walking through to the living room that witnessed much pain and shame only 48 hours earlier. There were fewer children today in the shelter.

I saw Farida come out to greet me. It was the first time she wasn’t wearing her headscarf. Farida is 15 years old. She has learning difficulties and was raped on a trip her orphanage took her out on. When she fell pregnant, she was referred to the street mothers shelter. Farida does not like to shower, is always infecting the under five’s with lice and soils herself at night. Today she came out to hug and kiss me looking very proud, but still not talking to me. Shaimaa tells me, Farida has been waiting for you to come, Nelly, to tell you it’s been three days that we don’t soil ourselves at night and we’ve been having showers every day. I don’t know when I would have ever imagined I would be in a situation where I was congratulating a fifteen year old pregnant girl with learning difficulties for not soiling herself during her sleep or for showering every day; but I was, I was telling her I was very happy with her and that I would be getting her a special present when I come the next time for how good she’s been – this child, carrying a baby inside her that she had no clue how to take care of.

I sat to one side with Shaimaa; she wanted to give me an update on what had happened yesterday. I was right, there were fewer children. Maya and Samar had left that same day, Laila was taken in hiding, and Maha and Sarah were expelled from the shelter, Sarah taking her one-year-old daughter with her. The loss of six girls was a big loss. But the shelter maintains it is a vessel for rehabilitation and reintegration and refuses to provide a safe haven for criminal activity. What Shaimaa tells me unfolded in their investigation was just that. But either way, six children would be homeless again, facing a world bent on their victimisation, children growing into violent criminals who knew and had seen no better.

On the day of the incident, Hend had been crying all day. She would not tell anyone why she had been crying. Shaimaa, as experienced as she was with the girls, told Hend that if she knew about some harm being planned, she had to say, other wise she would be just as guilty as the rest. It was then that the plan to attack Laila unfolded. Hend had heard the girls planning the kidnap and rape the night before and she had been too scared to tell, not only so she does not get in trouble for telling, but also she was worried the girls would hurt her.

Laila had been the only girl who cut off all ties with her “street family”. On Thursdays when all the girls were allowed out for the afternoon, it was a public secret that they all went back to the street visiting the boys and girls who they had lifetimes of experience, memories and shared misfortune. A father who had remarried and had other children from his new marriage, however, left Laila, on the street and she was lucky not to have stayed long on it. A woman had found her crying on the pavement after midnight and had taken her to a police station where she was then referred her to the shelter. Because she was much older than the virgins at the 10th Ramadan, it was decided that she would stay with the mothers who were all over twelve-years-old.

Laila’s steps on a Thursday afternoon were known. She would leave the shelter to walk to the super market to get her favourite drink and then to the fruit stall to buy some apples that she would later boil and sweeten for the under fives who all had a soft spot for Laila. The three girls had arranged with a taxi driver and two street boys to kidnap Laila on her walk between the super market and the fruit stall, the following Thursday, where they would then, all, rape her and scar her face just below the eye in the curved carving they knew all too well, stamping her with the mark they all had, marking her as being the same as them, subjecting her to their normality, their life, their fate and their shame.

Two days after the blog got around, a kind woman decided she would donate enough money to keep Laila safe for many years to come. As much as this made me happy and helped me regain faith in human solidarity temporarily, I could not help but ache for the six children, three of whom carried so much hate and contempt in their heart, who at their very core wanted revenge for the pain and suffering that they themselves had experienced, whom were not as fortunate as Laila, who were worse off because society had covered them with the flag of the “unclean” because their hymens were broken.

How was I going to look at Maya and point at her with blame and reprimand? Maya who had been living in an imaginary circle drawn outside the toiler from the age of three to six, where her stepmother had made her eat, sleep, soil herself and play. Maya who was allowed out three years later to be a maid to her new sisters and had her skull cracked by her step mum for burning the rice; Maya who had been raped by four men on the street when she was seven a week after running away from the abuse her father had inflicted on her for upsetting his new wife? How was I to tell Maya how horrific her plan to attack Laila was when was put into an adult prison for three years at the age of thirteen for a crime she did not commit and for not having ID to at least keep her in a juvenile youth offending center? How could I blame Sarah for her involvement after she was made to watch her mother have sex with strangers from the age of six and when she fell in love at 13 with a man double her age was offered as a sexual favor to all his family and friends and then abandoned by him as soon as she fell pregnant by one of them?

There are circles of violence and it is easy to ask what the world is coming to when you hear a story like this. But, the uncomfortable truth is, reader, you and I have a finger somewhere pointing at us. At the very start of that circle of violence, we live in a culture and country that give “ownership” to parents over their children, a country where it is more shameful to have a child living in care than a child living on the street, a legal system that doesn’t allow me and you to call a number to save a child we know is suffering, we are at fault. We need to campaign for social care, we need to campaign for monitored intervention, and we need to campaign for comprehensive, accessible, safe, scrutinized child protection. The very same children our hearts ache for now will grow into cold criminals losing the childhood that makes us pity them. They will grow looking for revenge not only from each other, not only from the obvious abusers, but revenge from a whole society that knew about them, saw them, heard of them and then got up to make a cup of tea and got on with the rest of their day.